Alytes is in a late stage of a sales process and therefore not available. If you are interested, please feel free to write us. In the very unlikely event of a broken deal we would be happy to contact you.

Starting January 2016, this Lagoon 400 (owners version) is for sale. Have a look at this autonomous explorer equipped for the long cruise or as luxurious floating home.

Our family of three is currently sailing it from Indonesia (December 2015) toward Spain (July 2016) via Singapore (New Years Eve 2015), Thailand (January 2016), Sri Lanka (February 2016),  and some mediterranean countries (Turkey, Cyprus, Greece, Italy, Baleares, all between May 2016 and July 2016). At all of these places, you can have a look at her, although Turkey would now be the best option. There, she will be hauled out for surveying, anti-fouling and polishing.

This owner operated 3-cabin layout Lagoon 400 was enhanced and optimized for autonomous long term exploration. The boat spend almost six month in the South Pacific crossing 7.600 NM from Panama to the north of the Solomons with less than two full tanks of gas (no extra jerry cans involved, promise).

On top of the already great Lagoon 400 features many extras were installed to keep you sailing safe and comfortable without having to stop for fuel or laundry too often. Desalination, 600 liter water tanks, almost 800 Wpeak of solar power, 800 Ah of reliable AGM batteries, SSB Radio, Iridium satellite phone, 3000 Watt inverter, a washing machine, heating system, two skipper cabins and bespoke extra storage solutions let you go wherever you and your crew of up to nine want to sail. 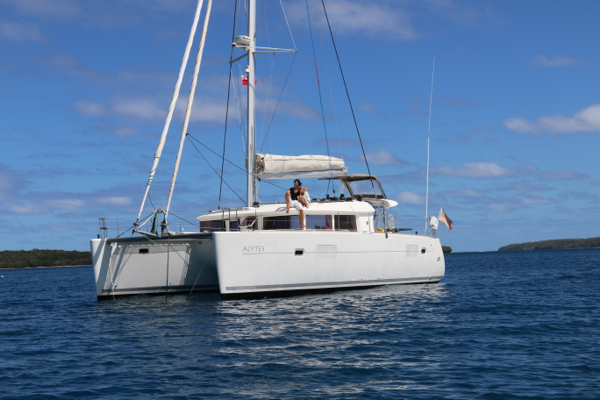 Now this Lagoon 400 is for sale, check out the furling North Sails Code Zero, the helmsman’s bimini and the SSB whip antenna and Jon Buoy MOB-system installed aft

The owner’s version gives you a huge master cabin occupying the straboard hull with slatted double bed, workspace, cabinets and shelves. The master bathroom is spacious featuring a separate shower cabin, large window and big hatch for lots of air during your refreshing morning showers. 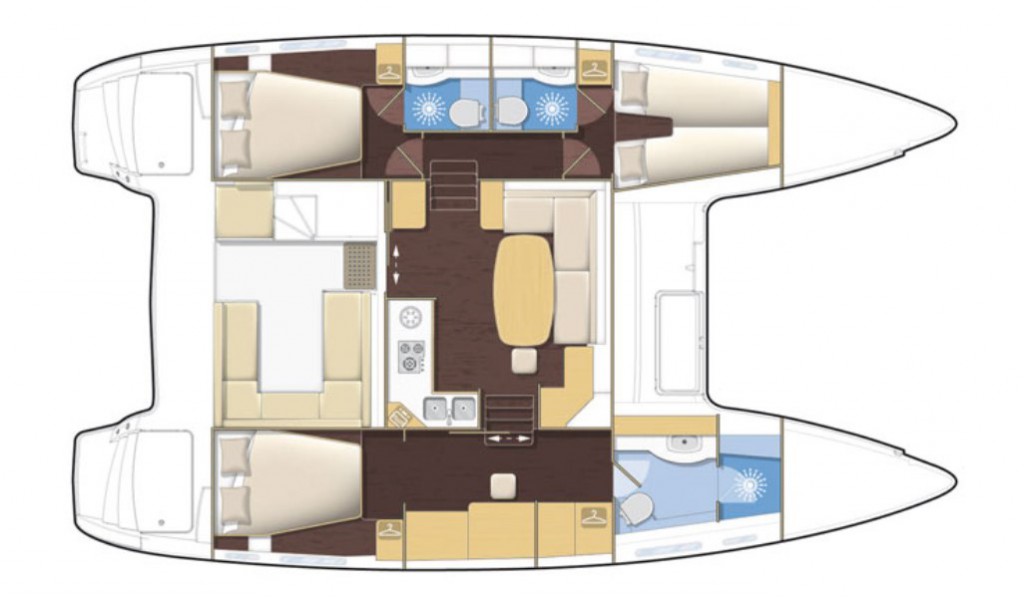 Owners version layout: the picture doesn’t show the two skipper cabins in the front (ahead of shower and port bow cabin).

The crew cabins have their private bathroom with shower and hatch. All bathrooms feature the legendary Jabsco Silent Flush electric toilet. Four more sleep in two skipper cabins and a convetable salon table, if desired.

Her Raymarine 2011 Navigation Suite is enhanced with the digital radar, fishfinder and AIS transponder. A remote control for the autopilot lets you watch that nasty weather from the cozy living room with its big galley, sofa (all in posh and easy to clean Astra Beige leather style), multi-source HiFi system and TV.

All other necessary controls are centralized at the helm, protected by a sunbrella sun and rain cover for the master. An electric winch makes your life easy and the remote control for the VHF allows you to deflect those 1000 feet tankers while you are crossing their path under sails.

You only want to sail her around her new home port? No problem: whatever works on a circumnavigation is double safe and comfortable for shorter term cruises. Just think of the security provided by her EBIRP, DSC SSB, GPS satphone, DSC VHF, Jon Buoy MOB seat and her Raymarine LifeTag Sytsem.

Her Caribe 340 Light Dinghy is also for sale. It’s 20 hp Honda four stroke outboard offers the maximum power possible on the large RIB tender. It will take you, your guests and a load of provisions (or dive gear) over many miles of rough seas.

She is meticulously maintained and clean. Never been chartered and currently sailing in Southeast Asia towards the Mediterranean.

Next stations for a live tour will be approximately:

Alytes will be hauled out in Turkey. This is currently the best time for you (or your surveyor) to check her inside-out.

Please consider all these dates as a rough estimate, as we are sailing these waters and we never know exactly when we will be where. We will update the exact dates when we arrive at the south end of Suez, so you could plan your travels.

Check out the exposé (PDF document) for more pictures: Lagoon_400_Expose_final_v11
Check out the Inventory List for more information on her extras: Lagoon 400 – Modell 2011 equipment_v11 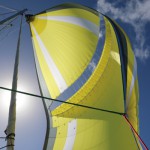 The brightly colored IS-Tec Parasailor can’t help it. Smiles all around once it is rigged. But it is not just the friendly color and nice curves.The Parasailor provides quick sailing in all courses from 130° starboard to 130° port.Due to its kite is a lot easier to sail then a Spinnaker, as it copes more easily with changing wind situations. We sailed it up to twenty knots, but others took it through thirty knot squalls on the pacific. 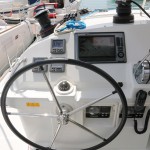 Here you’ve got it all together:ST70 SPX Smart Pilot display, two ST70 multi-function displays and the Raymarine E120 wide screen hybrid touch system.All lines are lead to this station, so you rarely have to leave it when under way. Not even to use the VHF radio, as there is a remote station installed right where you need it.The left winch is electrically powered and controlled by the two switches on the left side just below the steering wheel. 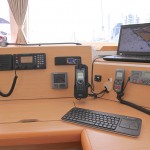 Here you find the SSB radio, VHF, sat phone, ST70 MFD, controls for the Eberspächter heating, the multimedia system, the toggle for sounder / fishfinder, the remote control for your autopilot and the onboard computer.This computer features a current version of MaxSea with weather routing and all maps for circumnavigating the planet close to the equator. It’s yours to own. With this setup, you don’t have to be outside in the rain. 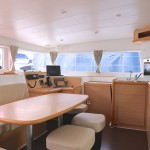 Fox leather “Astra Beige” cushions add to the very bright atmosphere in the salon. There is a lot of room due to the compartments above the oven and overhead storage above the three flame gas stove.Notice the second faucet that delivers fresh or salt water via foot pump.You can also see three of the four storage stools included in this offer 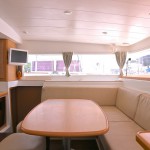 Here you see the TV-set and EPIRB (just below).All lights on this boat are LED so you don’t have to worry about leaving the lights on.Notice the second reading light above the corner of the sofa. 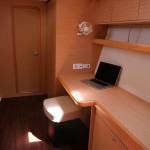 Just took the steps down into the owners hull.Flooded with light it provides a lot of room for working, books and loads of cupboards.Notice the shelves under the upper cupboards. You won’t find this custom made storage in most other2010 Lagoon 400s.The closed door hides the master bathroom. 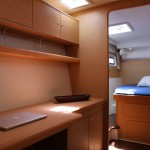 A glance to the right in the owners hull reveals the large Masters Bedroom. Four windows make it bright and friendly. 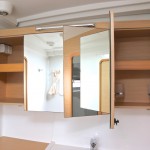 French design in the Masters Bathroom. See the two 220 Volt outlets in the upper left. Seldomly found on boats. 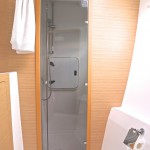 A glance into the shower of the Masters Bathroom 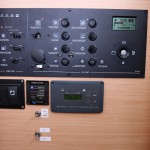 Electrical Panel (Front) Everything electrical is controlled from here. There are two battery management systems, we focus only on the more precise, add on Mastervolt system. See the switches for the deck wash pump, 3.000 Watt inverter and tricolor light in the mast head. You can also see switches for the Fischer Panda HTG generator. We do not use it since there is plenty of solar power. 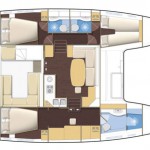 Owners version layout: You will love the shower